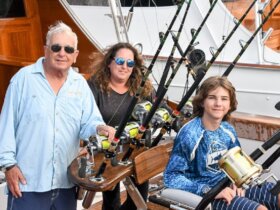 "The
first day, we headed out to a FAD on the north side of St.
Croix," says La Mensagera mate, Kevin Moran. "We didn’t have much
luck, except one wahoo and one tuna. Then, we went to
another FAD. With only two hours left before lines out, we caught four wahoo including a doubleheader. They were all on a blue and
white lure with ballyhoo. It was a really fun first day."

Come the
second day of the tournament, Moran says, "It was a really slow day. We
only caught a nice size tuna."

It was
Golden Eagle, captained by Joe Hollins, which boasted the angler catching the Largest
Wahoo. Richard Belliveau reeled in a 43.6-pounder.

Edgar Bengoa, fishing aboard Plumb
Cool with Capt. Pat Barsotti at the helm, hooked
the Second Largest Wahoo, a 36-pounder.

Lady
angler, Peggy Noel, fishing from the Megu with Capt. Harold Price, rounded out the winner’s
circle with the catch of a 34.6-pound wahoo for Third
Largest.