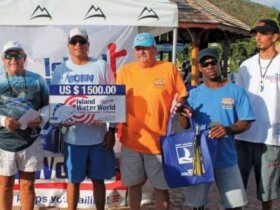 Fishing aboard his 25-foot Spider 100% Fisherman, as lone angler and skipper, John Rose caught his winning whopper dolphin around 8am off the south side of St. John. "I saw birds and that led me to the school where I caught the biggest fish."

This first place fish was just over 18-pounds shy of the over 55-pound criteria to win the tournament's ultimate prize – $25,000 in cash.

An hour and a half later, John Rose caught his second dolphin of the day, a 33.88-pounder, which earned him the tournament's second largest dolphin prize.

"We caught two dolphin in the morning and then nothing," says Petersen. "We saw frigates, floaters and even porpoise, but nothing else, the pressure was really on. Then, we spotted one bird in the right spot and that's where I caught the big bull. It was magical. We got back to the dock with literally only a minute before weigh-in."

"We caught them mostly by seeing the birds," says Red Bailey, captain of the 44-foot custom sports fisherman Abigail III, and president of the VIGFC. "We started catching fish about 10:30am off the southeast side of St. John and kept catching them as we worked our way back to St. Thomas."

Eleven-year-old Billy Biscoe, Jr., who was fishing aboard Abigail III, won the Junior Angler award with the catch of a 22.66-pound dolphin.

The fleet of 25 boats and 106 anglers representing all three U.S. Virgin Islands collectively caught 73 dolphin. Many boats donated one of their catch to the host VIGFC, where this was the featured entrÃ©e at the Awards Dinner held April 18.

The VIGFC Dolphin Derby Fishing Tournament was sponsored by Budget Rent A Car and Premier Wines and Spirits.