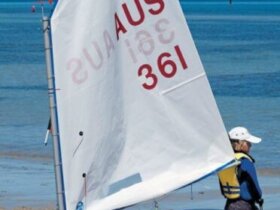 As 2005 neared its end, the Trinidad and Tobago
Sailing Association still found the time to squeeze in the Guardian Holdings
Southern Caribbean Regatta, which wrapped up on December 30.

True to form, Matthew Scott clinched the 27-strong Optimist fleet,
recording just the one victory in 11 races over the three days, but rarely out
of the top five. Alkins, who won four races, paid the
price for a 16th place on day two to come in second. The top four
places went to local sailors, underlying the talent in the region.

Equally emphatic was Paul Amon’s victory
in the SR Max class, his crew taking eight out of ten races.

Only two sailors contested the Laser Radial class and unluckily for
Phillip de Gannes, one of them was Antigua’s
Karl James, who won nine out of ten races. A DNF in race five allowed de
Gannes some respite. Six sailors competed in the Laser
Standard class, won by Alan Alkins.

While competition in some classes may have been a little thin, the
year’s final regatta did everything
to highlight Trinidad and Tobago’s
prowess in junior sailing. Where these youngsters progress from Optimists will
be something to keep an eye on, but regional regattas of this kind are where
future Olympic sailors are made.