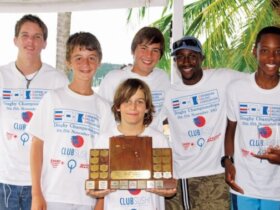 With just over a month before the start of the 30th edition of the St. Maarten Heineken Regatta (4-7 March), entries are stacking up for the Gill Commodore’s Cup.

Now in its sixth year, and held as one of the run-up events to the regatta – Thursday 4 March – this annual event is fast becoming a popular choice for race teams keen to tune up and ‘iron out the kinks’ before the start of to the three-day Heineken Regatta series which starts the next day.

The line up in this simple, three race/one day format event which is sailed on windward/leeward courses, two miles offshore, looks set to produce some good, competitive racing with the likes of Bill Alcott’s Andrews 68 Equation among the biggest in the fleet. Bill Alcott has been visiting the Caribbean with various yachts with the name of Equation since 1996 so it’s no surprise to see the current version – an Andrews 68 – already signed up and ready to go this year. Stu Argo – Tactician commenting on the Heineken Regatta said: “We all love the island of St Maarten and all our friends at the Sint Maarten YC who do such a great job running a top notch event. The great sailing conditions and the wonderfully run shore side functions are a welcome respite to all of us winter weary yachties from Detroit.”

Like many of the teams taking part in the event, Team Equation is using the Gill Commodore’s Cup as their final shake down but are keen to get out on the water the day before to check the yacht’s systems, the rig and the sail package and instrument calibrations. “The idea,” added Argo, “is to run through some boat handling to make sure the crew has gotten rid of all the northern brain freeze! The Gill Commodore’s Cup allows us to apply the proper pressure ramp to being race ready for both yacht and crew for the start of the Heineken Cup the next day. I would recommend it to any and all the other yachts. It’s just a plain blast!”

Local sailor Ian Hope-Ross who has also participated at the event for many years and won his class in the first two Gill Commodore’s Cup events is hoping to better his runner up position last year aboard his Beneteau First 36.7 Kick ‘Em Jenny. Hope-Ross commented: “It was difficult to perform well last year because we were put in with the 40ft boats. The race itself however, is a short-course, crew-intensive series of races and my crew is knowledgeable and experienced and have made all the difference. The windward/leeward format, offshore however, negates any local knowledge advantage.”

Thanks to Gill – yacht, dinghy, and keelboat technical clothing specialists – competitors racing for the Gill Commodore’s Cup will have a chance to win products in Gill range, and take a look at Gill’s brand-new Race Collection designed specifically for keelboat racing in warm climates. Nick Gill – Gill’s Chairman – will also be present at the regatta to not only promote the new range and explain the technical aspect but also to offer invaluable advice on how to get the best from the new products. Gill speaking after the launch at the recent London International Boat Show said: “We are delighted to be involved with the Gill Commodore’s Cup and the Heineken Regatta and regard it as a great opportunity to showcase our new race collection. The new products are not only exceptionally lightweight, breathable, and waterproof but are also quick drying and offer sun protection from harmful UV rays – key design features for this sort of Caribbean regatta racing.”

The new Gill range will be showcased throughout the Heineken Regatta and there’ll be plenty of opportunity to purchase these products, and the official Gill Commodore’s Cup-branded gear at the regatta, or direct from Budget Marine.