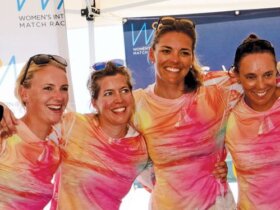 A full calendar of sailing events is underway this summer at Ponce Yacht and Fishing Club (PYFC) in Puerto Rico.  These include the 2012 ISAF Summer Olympics, PYFC’s annual summer sailing camp and preparation for the Optimist IODA World Championship in July.

The sailing community is still recovering from several fatal accidents which occurred earlier this year, notably the accident in San Francisco which claimed the lives of four sailors.  In response, the sailing community in Puerto Rico has focused on sailing safety, which was discussed at a safety program for the Puerto Rican Boy Scouts on May 5 2012.  Organized by Jorge Guttierez, the program was instrumental in training the Boy Scouts on boat safety. The program stressed that all sailors should be aware of the many changes that occur daily due to the weather conditions. And mentioned that although the US Coast Guard is available for emergency calls, wise sailors take special safety precautions before they sail, which includes checking weather conditions, wind speed and wave height etc., available to them online.

In addition to the boat safety seminar, PYFC hosted Festival Olympico 2012, June 2nd-3rd in Ponce. This annual regatta for PASAF sailing classes is organized by the Federacion de Vela de Puerto Rico and PYFC members. Festival Olympico consisted of four classes and featured some highly competitive sailors including the 2010 CAC games Snipe gold medalist and former USA Snipe National Champion Ernesto Rodriguez, and the gold and silver medalists PYFC locals Frito Lugo and Jorge Santiago. On Sunfish, local sailors included Pan Am games Hobie 16 gold medalist Fernando Monllor and his brother Alejandro who participated on RSXs in preparation for the ISAF Youth World Sailing Championship in Dublin, Ireland, on July 12th-25th. The special invitation class was the Optimist class. The Opti’s entered with a strong training program during the summer in preparation for the 2012 Optimist IODA World Championship. As a part of their training, the Puerto Rican team participated in the Scotiabank International Optimist Regatta in St Thomas sailed June 18th-24th. This is followed in July (15th-26th) by the Optimist IODA World Championship in Boca Chico, Dominican Republic.

The PYFC’s annual Summer Camp started right after Festival Olympico, taking place from June 1st to June 29th.  The emphasis was on junior sail training, using Optimists and 420s as training boats.  The camp combines fun sailing activities, swimming and other outdoor activities, and is always popular with the kids.  The Club has a full schedule of fun events planned throughout the year and everyone is invited to join the fun.

For details and a complete schedule of events, visit: www.discoverpyfc.com