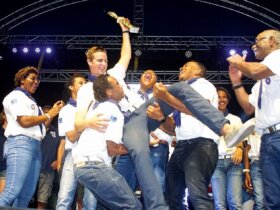 With less than a month to go before the kick-off of the 31st St. Maarten Heineken Regatta, which this year runs from March 3-6, the entry list continues to grow at a rapid pace, and now surpasses over a hundred yachts (the “century mark”) competing in a half-dozen different classes. The numbers are also growing for the Gill Commodore’s Cup, the separate one-day event for hard-core racers that precedes the three-day St. Maarten Heineken Regatta. At the latest count, the Gill fleet rounded out at an even twenty boats.

As always, the more laid-back bareboat class is historically one of the largest divisions at the St. Maarten Heineken Regatta, and it appears that trend will continue for 2011. With nearly four-dozen entries thus far, the “bareboaters” will once again be in the thick of the action.

With over fifty entries to date, however, the lion’s share of entries will be racing in the CSA Monohull classes, and it’s a truly international field, with competitors flying home flags from France, Germany, Great Britain, Holland, Italy, Puerto Rico, South Africa, Turkey, the United States, and a host of Caribbean nations.

While the sailors themselves represent a wide and varied background, the respective yachts also form a diverse and eclectic fleet. At the smaller end of the spectrum are the Melges 24, Budget Marine/Gill, as well as a host of boats in the 30- to 35-foot range, including Tanner Jones’s J/30, Blue Peter; the Beneteau First 310, Americano CafÃ©; a pair of swift Melges 32s, David West’s Jurakan and Mark Plaxton’s Team INTAC; Todd Mahoney’s Sigma 33, Overtime; Schrijverke, a Victoire 34; No Face to Face, a J/105; and the radical Kiwi 35, Wild Devil.

On the other end of the scale, Sir Peter Harrison’s sensational Farr 115, Sojana, a perennial favorite at the St. Maarten Heineken Regatta, will once again be soaring around the racecourse. But Sir Peter will have plenty of company in the big-boat divisions in a fleet that includes another big Farr design, Peter Buckley’s 98-foot I-Sea; a Swan 100, Varsovie; a Swan 82 and 80, Nikata and Team Selene, respectively; a Carbon 82, Aegir II; and Bella PITA, a custom 75-footer designed by Bill Tripp.

In the middle ranges of the St. Maarten Heineken Regatta field, Bill Alcott’s Swan 601, Aquarius, is always a dangerous presence. Puerto Rican Sergio Sagramoso, who was often a dominant competitor in his old Beneteau First 40.7, Lazy Dog, will be no less of a threat in the Grand Soleil 54 of the same name that he now campaigns. The popular 40.7 is still a favorite Caribbean racer/cruiser, and four have entered thus far: Coyote 2, Mystery, Smile and Wave, and Spirit of Venus.

In fact, some of the hottest action on the racecourse will take place among the 40-footers, which also include Rich Wesslund’s well-sailed J/120, El Ocaso; Wild T’ing, Lawrence Aqui’s Dufour 40; Lenjohn Van der Wel’s Class 40 flyer, Van Der Wel Racing; and Otra Vez, a J/122 skippered by William Coates. The “sleeper” in this competitive group, however, may well be Bob Read’s J/40, Nepenthe. The veteran New England sailor knows a thing or two about yacht racing, and is also the father of a couple of pretty good racers: sons Brad and Ken, both multiple World Champions in the J/24 class, and the latter a former America’s Cup skipper who now heads up the Puma Volvo Ocean Race campaign.

All in all, it’s shaping up to be another stellar year for the St. Maarten Heineken Regatta. And there’s still plenty of time to make sure you’re part of it.

For full information on the Budget Marine Match Racing Cup, Gill Commodore’s Cup and the St. Maarten Heineken Regatta, as well as entry lists, past results, photos, videos, party and band information, the Notice of Race, Sailing Instructions and much, much more, visit www.heinekenregatta.com.