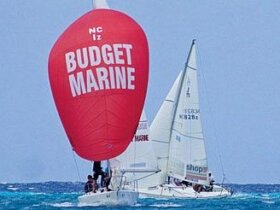 Another Successful Edition of the Budget Marine Challenge

For the third time, Curacao’s biggest bank MCB (Maduro & Curiel’s Bank) organized a trip on the clipper Stad Amsterdam while the ship was in port to say thank you to the local media. General manager Lionel -Chicu- Caprilles and PR & Marketing lady Caroline Sluis-Gibbs welcomed more than 100 TV and radio makers, journalists and photographers on board for a five hour sunset trip to the western part of the island. After the visit to Curaçao, Stad Amsterdam continued her Caribbean journey to Santo Domingo where she arrived a full day too early, using the extra time doing some training. After a break of a couple of hours in Santo Domingo, where passengers from Curaçao disembarked, the clipper continued her way to Puerto Rico, preparing for the yearly US Coast Guard survey. Clipper Stad Amsterdam was built by Damen Oranjewerf in Amsterdam in 2000. The full-rigged three mast clipper has a tonnage of 698 GT.  The ship operates luxury coastal and passage cruises in Europe and the Caribbean. More information:  www.stadamsterdam.com

Whether for repairs or respite, it will be even easier to find a slip at Curacao Marine next year. In 2020, owners plan to add another 22 wet berths.