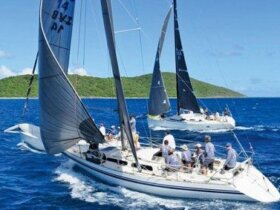 There will be more than fifty of them: yachts of every size and class from all over the Caribbean, competing at Les Voiles de St. Barth. For the second year, the St. Barth Yacht Club and their partners have come up with a spectacular program for this international yachting event that runs from April 4 – 9. Some of the most notable yachts with their experienced crew will be on hand for a week of racing on the fantastic sailing waters of the Caribbean. Maxi yachts, multihulls, and classic yachts have answered the call to compete at Les Voiles de St. Barth, where competitors can look forward to challenging sailing among the surrounding islands and where, back ashore, they can be certain of a friendly welcome.

While the island of St. Barth is a tranquil place for a quiet holiday, the waters around it guarantee that even the most reserved yachtsman will be thrilled. In any case, the yachts registered for the second edition of the Les Voiles are not going to have a quiet time of it. This is proven by the crew lists, which note the presence of some of the top skippers and crew from the international yachting world.

The 97-foot canting keel maxiÂ Genuine Risk, a Dubois-designed boat that recently won the Pineapple Cup Montego Bay Race will have the Swede Hugo Stenbeck at her helm. A successful ice hockey player, Stenbeck led the Swedish America’s Cup team, Victory Challenge, in Valencia in 2007. He will head an international all-star crew with a wealth of experience, including the American Ralf Steitz, who crewed for Dennis Conner during his America’s Cup campaigns. The Frenchman, Laurent Delage, who was the sail designer for Victory Challenge, has two Olympic medals in the 470 class and will be offering a French touch to the Swedish team, though it also includes Danish tactician Rasmus Kostner, who previously sailed withÂ Mascalzone LatinoÂ in the 2007 America’s Cup.

Another American competitor that everyone will be watching is the 2010 Les Voile de St. Barth Maxi class winner George David, who will be onboard the Juan Kouyoumdjian-designedÂ Rambler 100 (ex-Speedboat), which recently won the RORC Caribbean 600. Short daily races will provide a change for the crew which is made up almost entirely of members of the Puma Ocean Racing team led by American Ken Read (Newport, RI). At Les Voiles, they will have to deal with close quarters buoy racing, where strategy is often more important than sheer speed. For their second go at Les Voiles, Read and his crew, from six different nations, are taking this event very seriously and see it as part of their preparation for the upcoming Volvo Ocean Race. “After all,” Read explained, "Rambler 100Â is just a more powerful version of a Volvo 70."

As for French sailors, Lionel PÃ©an has been enlisted by the British owner, Peter Harrison, to race onboard the 115-footÂ Sojana. The Farr-designed ketch is a perfect example of first-class yachting and was designed for cruising and speed. The well-known French fashion photographer – and last year’s godfather of Les Voiles – Patrick Demarchelier will be racing again aboard his impeccable Swan 45,Puffy, in the Racing class. There he will come up against some other Frenchmen including RÃ©gis Guillemot and hisÂ Pogo 40,Â in what is likely to be a closely fought contest in the Racing class, 50 feet and over.

All of these world-class sailors will come together on Monday, April 4 at Les Voiles de St. Barth’s official registration and the opening ceremony, to mark the start of a week of exciting racing.Â  The event will offer spectators an amazing sight with a great fleet of boats enjoying the tail end of the sailing season on the blue-green waters off Saint Barth.

Les Voiles de St. Barth will be hosted from April 4 – 9 2011 by the St. Barth Yacht Club, which is affiliated with the French Sailing Federation and the Caribbean Sailing Association.

"More than 50 yachts have registered for Les Voiles de St. Barth 2011 (complete entry list is online at:Â www.lesvoilesdesaintbarth.com) and they will be split into five classes:

CLASSIC:Â referred to as classic or traditional yachts, these boats must be at least 35 years old.

RACING/CRUISING:Â  mostly series boats, which are designed for cruising and for racing.

RACING-MULTIHULLS:Â Racing multihulls, including trimarans and catamarans, between 30 – 60 feet in length, which are very light and fast.

Les Voiles de St. Barth will officially begin on Monday April 4, 2011 with the registration and the official opening of the Race Village on Quai du GÃ©nÃ©ral De Gaulle in Gustavia.

The Race Committee, led once again by principal race officer, Luc Poupon, will signal the start of the first race at 1300 (local time) on Tuesday, April 5. Racing for the rest of the week (Wednesday – Saturday) will begin at 1100. Thursday, April 7 will be a lay day, which will give the crews a chance to relax and enjoy themselves with a full and varied program of events planned at St Jean Beach. The closing ceremony and fireworks will follow the awards ceremony on Saturday, April 9.