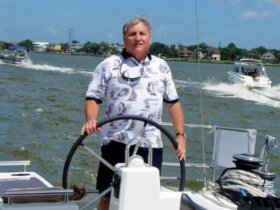 Any time a major sports television network takes interest in an island produced event it should be cause for celebration. In this case it’s the world renowned Sint Maarten Heineken Regatta that piqued ESPN Caribbean’s interest and for the first time in the regatta’s history the 2011 event was filmed and aired internationally to positive reviews.

ESPN’s interpretation of the 31st regatta was praised for its well-rounded coverage and accessibility to the casual viewer that opens up potential to attract a wider range of audiences.

The regatta organisation already has a well oiled publicity machine but ESPN’s participation has the potential to broaden the event’s appeal to all corners of the globe. Regatta Director Heather Tackling disclosed in August the regatta and ESPN was close to signing a five year deal.

“Having ESPN show interest and produce a programme about the Sint Maarten Heineken Regatta not only sheds light on the event but also on the island and the region,” she said. “We are excited ESPN sees the value in Caribbean racing and that it is willing to make a commitment of five years to the event. It will allow the island and the regatta to use this exposure to advance the regatta. We are working very closely with the staff to ensure the programme brings across the experience of Caribbean racing and we look forward to a great long term partnership.”

Stewart, no stranger to St. Maarten, was formerly with ESPN in Asia for ten years. He became interested in getting ESPN involved in the island following discussions with St. Maarten Cable TV last year.

“When I was offered the Caribbean assignment by ESPN I found out few Fortune 500 companies have a really strong strategic view of what to do with Caribbean businesses,” he explained. “It was an opportunity for me to step in and use the toolbox I developed over time to find out if there’s real business here and to let people know who we are.”

Asked what attracted ESPN to the island, he said: “You have an event going on for 31 years with 200 entries from around the world each year, thousands of visitors, a major sponsor is involved, and the whole community is behind it. Forget the genre, how could you not be involved? I think the regatta was one of those quiet stories that grew and grew. Sport has a way of giving you compelling stories.”

“Who knows how far this can go,” he added. “With the right kind of participation and right story telling we can place the coverage on a variety of our networks around the world. The advantage of a partnership with Minister Meyers and the tourism board is that they have the same goals as us. We want to speak to the same people. They want to tell people to come to St. Maarten. If we all work together on this we can check off the boxes that will be beneficial for everyone.”

The 31st regatta was seen by 2.2million viewers on ESPN in Australia and the Pacific Rim. Another six million watched it on ESPN in the Middle East, North Africa, Africa and Israel, while 800,000 saw it in the Caribbean region.

Robert Luckock is a British journalist and freelance writer residing in St. Maarten since 1984. He is currently The Daily Herald’s correspondent for French St. Martin and was one of All at Sea’s very first contributors.