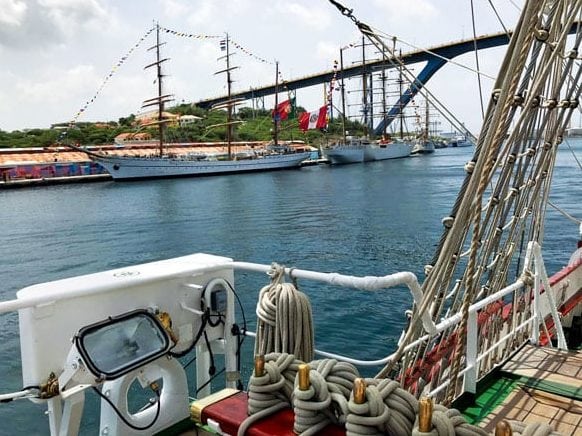 Dip into a Dutch treat at the lowest part of the Caribbean and you’ll be tempted to linger and explore the Netherlands Antilles about 40 miles off the coast of South America. Aruba is known for party-loving beach resorts and Bonaire for great diving. But Curacao, the middle and largest of the three islands, offers more than just plentiful vacation amenities—it has historic and cultural depth, too. And as members of its marine industry emphasize this time of year, this island is below the “hurricane belt.”

If your time ashore is short, start by visiting Willemstad, a 20-minute trip from the Spanish Water marina area via taxi. The city is divided into two districts, Punda and Otrabanda, by the Santa Anna Bay, which you can cross by the Queen Emma Pontoon Bridge or via a free ferry. Bring your camera for shots of the colorful Dutch-style gabled townhouses and South American boats selling fruits at a floating market. For insight into the island’s slave trade history, don’t miss the remarkable Kura Hulanda Museum built around a courtyard where African slaves were auctioned. There is a maritime museum in Willemstad, too, featuring ship models, maps, and historic nautical gear.

A good lunch choice with a view is the verandah of the Café Gouverneur de Rouville in a 19 th century mansion on the Otrabanda waterfront. For a splurge evening, reserve an outdoor terrace table at Bistro Le Clochard built into a fort guarding the harbor. Expect excellent, international cuisine here and in other island restaurants—and you’ll find Dutch cheeses, Italian jams, German Yoghurt, and Venezuelan beer when you provision before departing.

The Sea Aquarium itself, great for kids of all ages, offers daytime dry-land viewing of marine life in a series of salt water tanks plus a dolphin show. You can also arrange for in-water animal encounters—here’s that chance you’ve waited for to hand-feed sharks—and you can dive or snorkel with sea lions, rays, and dolphins.

Next to the aquarium is a good base ashore for SCUBA excursions, the unpretentious Lions Dive & Beach Resort, popular with young European visitors. The resort houses Ocean Encounters, the largest local dive operator, and another popular restaurant, Hemmingway’s. Here and elsewhere on the island, you’ll find young Dutch staffers who could be on the cover of the next S.I. swimsuit issue.

If you want to beach-hop and snorkel all day through a series of sandy coves dotting the west side of the 28-mile long island, consider renting a car. Some beaches like Playa Knip have snack bars, rental beach chairs, thatched shade palapas, and restrooms. While you’re out west, you can see dramatic wave action at the Boca Tabla rocks, scout pink flamingos sunning in the salt flats, and visit a Landhuis, or plantation house, dating back to days of slavery. The island is dry and its open plains and hills, studded by cactus, have a severe beauty.

For beach access without renting a car, take your dinghy to Barbara Beach at nearby Fuik Bay if you stay at Seru Boca Marina in Spanish Water. The marina and beach will be part of the Santa Barbara Plantation resort development slated to open by late 2007 with a Hyatt Regency hotel and 18-hole golf course.

Just a few miles offshore from Spanish Water are prime hunting grounds for Blue Marlin, Mahi, and Wahoo. The Curaçao Yacht Club sponsors a catch and release tournament each March and warmly welcomes visitors from other yacht clubs to their family-oriented clubhouse.

You and your crew will find all your marine needs, welcoming locals, and a bustling scene here—a cosmopolitan mix of Dutch, Latin, African, and Caribbean influences. With good boating facilities, beaches, museums, diving, sport fishing, restaurants, and nightlife, Curaçao is a don’t-miss cruising destination.

Port of entry : Willemstad—contact with call sign “Fort Nassau” on VHF Channel 12 (or 16) for instructions on clearing customs and immigration. You may be able to clear customs at your marina, then appear in person for immigration with the harbor police in town.

Where to take the boat : Recreational boaters will find dockage, anchorage, marine services, and the local yacht club in the protected harbor of Spanish Water Bay, reached through a channel at the southeast side of the island. Additional boat yard services are available in the more commercial port of Willemstad.

Money: The Netherlands Antilles Florin (or guilder) is the local currency you will need for phones, soft drink machines, and small items (exchange rate NAf 1.77 to US$1.) The U.S. Dollar is widely accepted by taxi drivers, shops, and restaurants. Credit cards can be used most places.

Language: Dutch is the official language and Papiamento is the local Creole dialect. English and Spanish are widely spoken.

Passports: Required for citizens of the United States and many other countries.