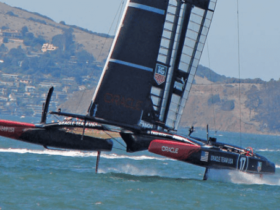 Personal challenge. Deep satisfaction. Inspiring younger generations. These are just a few of the reasons why Barbados’ Russell Streeter is putting every ounce of effort behind his Olympic Laser campaign.

Streeter, who was born in Barbados in 1979, says, “My interest in sailing was first aroused after going on a cruise for a friend’s birthday party. I learned to sail in 1989 at the summer training camps held by the former Barbados Yachting Youth Training Association. I was hooked after that summer. My best friend and I would spend nearly every weekend on the waters off Carlise Bay.”

Streeter started competitively racing dinghies during the 1990/91 season and keelboats the next year.

“For me, racing is an integral part of sailing. Even when I am cruising, I make sure that the sails are properly trimmed and the boat is going as fast as possible. I suppose that’s part perfectionist, part competitive instinct!” he says.

Streeter can’t remember the exact time or date he first thought about the Olympics, however it has been something he’s long desired.

“When I was younger, I assumed that it was not a realistic goal even though we have several sailors in our community who have been to past Games. That changed in 2004. The Internet made the sailing events of that summer’s Games more accessible and one of my friends was already campaigning in another class, which made the whole thing a bit more real. It was also the first Olympics in two decades that Barbados was not represented in the sport of sailing. I had already decided that I wanted to leave Barbados for a while, to expand my sailing experience, and all of these factors seemed to combine to make the idea of a campaign more feasible.”

Streeter left Barbados in 2005 and moved to Southampton, England. The move gave him an opportunity to take time off work, to get some formal coaching and to race in several international competitions such as Kiel Week in Germany and the European Laser Championships in Spain. In June 2007, Streeter represented Barbados at the ISAF World Sailing Championships in Portugal.

“These events have given me a huge amount of experience in many areas,” he says. “But the most important is racing in big fleets, from 30 to over 100 boats on the start line. This is totally different to racing in the five to ten-boat fleets we have at home.”

Streeter continues, “We have near-perfect conditions for sailing in the Caribbean. The weather is hot, the water is warm and the wind is fairly reliable, especially compared to Europe. The big problem for young sailors is that we have is a lack of depth in our dinghy fleets. This is mostly due to the cost and, as with everything else, the small size of our populations. Despite any of these challenges, there is nowhere else in the world I would rather sail than in the Caribbean.”

The most significant step in Streeter’s preparations for the Olympics over the last year was he decision to quit his job as an accountant for PricewaterhouseCoopers.

“Since September, I have been sailing full-time and in October I moved down to an international training center in the south of France. Based on the Mediterranean Island of Les Embiez, the center is run by a coaching organization called SailCoach, with which I have been training and racing on and off since 2005. The benefits of this are two-fold: apart from the wonderful conditions, such an environment allows us access to top coaches and the opportunity to train with other sailors with a variety of backgrounds, skills and experiences. Yet the biggest benefit to me is that, in the last two and half months, I have sailed nearly every day. This regime has helped me to break bad habits, learn new techniques and, most importantly, reinforce such techniques on a daily basis until they become second nature. The reality is that no serious Olympic campaign can be done unless the sailor is sailing full-time. Even a year is not really enough.”

Streeter’s chance to qualify for the 2008 Games comes this month at the Laser World Championships in Australia.

“There are 40 places available in the Laser Class at the Games and 30 of those have been decided. That leaves 10 available slots. The scale of the challenge ahead, therefore, is formidable. I try not to think about it, just to train as hard as I can every day. The truth is that, although we idolize that small group of talented sailors who have won a medal, just to qualify for the Games is a great achievement.”

Perhaps the most important piece of advice Streeter would offer to future Caribbean sailing Olympians is this: “Get some good, formal coaching as soon as possible. The hardest part for me in the last three years has been breaking old bad habits that I picked up because I never had any proper coaching. It’s important to learn the right techniques, and also to practice them all the time, even though they may not represent the easiest or most fun way to sail in the beginning.”

He adds, “Fitness is important. Swimming, cycling, running and rowing provide excellent cardiovascular exercise, and can become hobbies in themselves. You have to love the sport, otherwise the training will become a chore and you won’t get the most out of it.”

“Most importantly,” he concludes, “you have to believe in yourself, even when others don’t, and even after you have a bad day training or a poor performance in a competition. One of the biggest challenges is finding the will to continue in the face of adversity.”

Caribbean athletes often welcome financial support to make it to the Olympics.  Readers who want to donate to Russell Streeter’s Olympic campaign can contact him by Mail: 21 Park Cottage Drive, Titchfield Park, Fareham, PO15 5JD, UK; Mobile Telephone: +44 (0) 787 157 1434; or via his website: www.russellstreeter.com