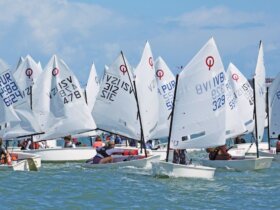 The Caribbean regatta season kicks-off in a big way come January. In the first three months of the year alone, there are over a dozen competitive sailing events for everything from mono to multihulls, dinghies to superyachts. Here is a sampling of events and what’s new this year:

January 15 – 24
Mount Gay Rum Round Barbados Race Series:  Organizers have expanded the program to include three days of coastal racing plus the main event, the 78th Anniversary Round Barbados Race. The event will conclude with the Open Passage Race to Antigua. Entries include Round Barbados Race record-holders, Idea, a 78ft Reichel-Pugh and Silver Bullet, a 30ft Super Cat. www.mountgayrumroundbarbadosrace.com

January 30 – February 2
The Superyacht Challenge Antigua: Ten 80-foot-plus yachts will sail in Pursuit-style races that start and finish off English Harbor. Nightly parties include a culinary competition. “All yachts will be on the new superyacht dock in Nelson’s Dockyard,” says organizer, Paul Deeth. “This should make the cook-off at the stern of each yacht a lot more fun.” Entries include the 98ft Farr-designed, Leopard 3; 147ft ketch-rigged sailing yacht, Timoneer; and the152ft schooner, Windrose. superyachtchallengeantigua.blogspot.com

January 31 – February 2
San Juan International Regatta: Over 100 sailors will compete in Optimists, Lasers, Sunfish, J/24s, IC-24s and CSA Racing classes. “We are adding a one-design Hunter 216 Class for 2014,” says regatta director Jose Berrios. A one-design J/70 class is expected to be added for 2015. Best of both world conditions see dinghies compete in the calm of San Juan Bay and bigger boats out in the Atlantic Ocean. www.sanjuanregatta.com

February 9 – 10
Budget Marine Interlux Open Regatta: Skill alone, not the investment in the latest marine equipment, is what wins this regatta raced on identical Sunfast 20’ mini-yachts in Simpson Bay Lagoon. “The schedule is designed to get lots of races in and to give everyone a new chance of winning,” says organizer and sponsor Robbie Ferron. Previous winners include Frits Bus, Jolyon Ferron, Karl James and Ashley Rhodes. Twelve teams are expected. sailboatrental.org/regattas, www.budgetmarine.com

February 11 – 16
RC44 Virgin Gorda Cup: Eight-plus powerhouse teams will sail in the RC44 Championship Tour’s first stop in the Caribbean. Hosted out of BVI’s Yacht Club Costa Smeralda, sailors will race around the buoy and on coastal courses. The RC44 was designed by five-time America’s Cup winner Russell Coutts.

February 24 – 28
RORC Caribbean 600: The first two entries for the 6th edition of this 600-mile race around 14 Caribbean islands were Antigua’s Bernie Wong aboard a chartered Grand Soleil 43, Quokka, and a crew from the British Royal Armored Corps Yacht Club who have chartered the First 40, Southern Child. There will be over 50 entries from two dozen-plus nations. caribbean600.rorc.org

March 6 – 9
St. Maarten Heineken Regatta: Over 200 yachts will race with crews representing more than 32 countries. New, says regatta assistant Karen Smith, “is an Inshore Class where a one design fleet will race allowing an affordable and fun way to join our regatta.” Several returning and new boats include Team J World Annapolis and ARC entrant, Khalessi, a 44’ X-452 with a young Norwegian crew. www.heinekenregatta.com

March 6 – 9
South Grenada Regatta: Two days of competitive fleet racing in CSA spinnaker, CSA non-spinnaker, multihull, fun and J/24 classes; a total of four title cups; exciting new race courses; plus Lay Day Match Races on Rush 10 catamarans are in store for 2014. “Spectators can experience the thrill of the races from the start-line floating bar, and other activities such as a day of junior sailing, speedboat tours, and a Pirate’s Trail for the kids ensures that there’s something for everyone,” says organizer Connie Martin. Participating boats get free berthing during the regatta weekend at Le Phare Bleu Marina. southgrenadaregatta.com

March 28 – 30
St. Thomas International Regatta: Formerly the International Rolex Regatta, no other regatta in the Caribbean offers so many classes and rating rules under which to compete. Teams are invited to enter in Caribbean Sailing Association (CSA); IRC; High Performance Rule (HPR); Multihull; CSA Bareboat; CSA (unmeasured) for boats from the U.S. Virgin Islands, British Virgin Islands and Puerto Rico; Beach Cats; and One-Design classes with a minimum length of 20ft. “Those of us running Caribbean events believe this will be a banner year for us,” says regatta director Bill Canfield. www.stthomasinternationalregatta.com

March 31 – April 6
BVI Spring Regatta & Sailing Festival: New this year is the return of the one-design course. “We’ve been working with the Melges and J-Boat associations to attract more one-design classes,” says Judy Petz. In addition, the winner of the International Yacht Club Challenge wins a free Sunsail charter. The event is known for competitive racing in three bodies of water, plus its nightly regatta village. In addition, the 2nd Caribbean Insurer Island Invitational, a race plus BBQ back on shore for the whole family, is April 2 and part of the Sailing Festival. www.bvispringregatta.org