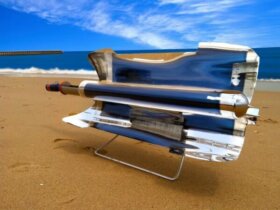 DR’s Marina ZarPar Now Offers 70 Ton Travelift
Marina ZarPar, S.A., Boca Chica, Dominican Republic, has commissioned their 70 Ton Travelift Marine hoist. ZarPar President Rafael Baez indicated that the 28′ beam of the machine would allow the marina to haul the many Catamarans that have not been able to find local service. The design has hydraulically-operated slings that can be adjusted quickly to conform to the ideal lift center of any hauled craft. The location of the new pit will allow boats with drafts of up to 10′ to be hauled. The working area of the marina has been constructed of reinforced concrete with a rating of 150 tons capacity.

Aruba Customs Now Offers eSeaClear
As of March 2010, Aruba customs has started to implement the
eSeaClear system (www.eseaclear.com) for yachts visiting Aruba. As the vessel will have to be cleared both by Customs and by Immigration, the captain will still need to do the paperwork for immigration separately. Arriving yachts will have to tie up at Barcadera harbor to clear before they can go to an anchorage or to the marina. For those yachts not using the eSeaClear system, forms can be found on the website of the Renaissance marina: www.renaissancemarina.com/clearance-procedures/

Dockwise Yacht Transport Forms Partnership
DYT, an international maritime shipping firm, has entered into a legal partnership with Global Boat Shipping of Leer, Germany, the company with which Dockwise has had a successful alliance since November 2008 for shipping yachts to the Northwestern shores of Continental Europe. DYT’s global routes for its semi-submersibles in our part of the world include the Bahamas (Freeport), the Caribbean (St. Thomas and Martinique). Since its maiden voyage in 1987, DYT has transported nearly 10,000 motor and sailing yachts to various destinations around the globe.
www.yacht-transport.com

In March, Marine Travelift, Inc., U.S.-based manufacturer of mobile boat hoists, announced the promotion of Stephan Chayer to Managing Director International Sales/Business Development. Chayer will be responsible for all international marine, industrial and government sales for the Company. Erich Pfeifer has also been promoted, to Vice President of Business Development and Marketing.

Mercury Racing reports that the company is poised to revolutionize the sport boat industry once again with the release of two new sterndrive engine packages. Engine air induction determines the difference between the 1300 h.p. model and the 1350: the 1300 breathes ambient air from the engine room (as most sterndrive engines do); the 1350 breathes cooler, outside air (like the Verado 350 outboard) through a direct air induction system. Direct air induction requires computer aided design integration with the boat, resulting in an added 50 horsepower per engine.

How to: File a Float Plan for Passages Between Grenada and Trinidad
Anita Sutton of Island Dreams in Grenada has supplied the following helpful information for sailors planning a passage in either direction: file your float plan with the Coastguard prior to departure; they need to know boat name, number of persons on board, brief description (monohull/catamaran, color, size), estimated departure date and time, and arrival date and time. Contact the Coastguard on arrival. If you decide not to stop or have to abandon your passage and turn back, please contact the coastguard as soon as possible to avoid unnecessary concern and search operations. Trinidad Coastguard telephone: 868 634 1476 or email to [email protected]. Grenada Coastguard: visit the Coastguard in Prickly Bay, or call them on 473 444 1931/2.

The flag of the British Virgin Islands was lowered to half-staff and assembled sailors offered a moment of silence at this year’s International Rolex Regatta. Guy Eldridge died on Friday, March 26 after a day of racing his Luxury Girl, following a fall down the companionway of another boat. “He died doing what he loved best,” said fellow BVI sailor, Colin Rathbun. Eldridge’s passing is a loss for the Caribbean sailing community, especially in the BVI where he was captain of sailing at the Royal BVI Yacht Club. An avid racer, Eldridge was known for making racing fun, such as adding a scavenger hunt to a regatta and hosting a pirate-themed awards party. When not sailing, Eldridge worked as a partner in the BVI office of Conyers Dill & Pearman and moved to the territory in 1996 to open the firm’s BVI office.
– Carol Bareuther