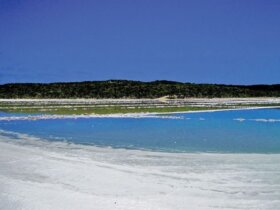 Island Global Yachting (IGY), announced near the end of the year that it had commenced a redevelopment of its Rodney Bay Marina on St. Lucia, W.I. and held a groundbreaking ceremony with company executives and Island officials.  IGY purchased the marina in early 2007. Slated for completion in late 2008, the new Rodney Bay Marina will feature 252 fully reconstructed slips including the addition of 30 megayacht berths and refurbished retail and restaurant facilities.  During the renovation, the marina, which also has a 4.5 acre boatyard, remains operational.  www.igy-rodneybay.com

Be on the Lookout for Barbary Duck

A Westerly Corsair with a white hull and dark blue band around the top of the hull was abandoned at 18.59N 32.25W some 600 nautical miles northwest from the Cape Verdes on the 1st of December and bears the British Small Ships registration number SSR 27564.   “The last two boats abandoned in this rough area drifted down to Anguilla.  The vessel should drift down to the islands somewhere around the middle of February,” says Bill Bailey of Caribbean Marine Surveyors Limited in Tortola.  If you spot it, contact Bailey at [email protected]

Veteran Dale Westin has been named general manager of Errol Flynn Marina and Shipyard plus some associated properties, according to an announcement by the Jamaica Port Authority, owners of the Port Antonio venues.  Dale heads up the Errol Flynn team after several years being general manager of Island Global Yachting’s Simpson Bay Marina at St. Maarten and prior service with Sun Resorts International as Caribbean regional marketing and sales manager.  Westin is a past commodore and life member of the Antigua Yacht Club, former racing chairman of Antigua Sailing Week, and is a member of the Professional Yachtsman’s Association.

A study of 100 sailboat sinkings from the BoatU.S. Insurance claims files reveals that sinkings were divided evenly into two broad categories: “those that sank at the dock and those that sank while underway,” said BoatU.S. Marine Insurance Technical Director Bob Adriance. Striking a submerged object was found to cause 40% of the sinkings while underway. Next on the underway list was a broken prop shaft or strut (16%) and damaged or deteriorated fittings below the waterline (16%). “Prop shaft corrosion seems to be a bigger issue with sailboats than with powerboats as auxiliary sailboat engines are not run as often, allowing corrosion to set in,” added Adriance. The most common cause of dockside sinkings was deteriorated or damaged or corroded fittings such as intakes, seacocks, and drains below the waterline.

St. Lucia’s Marigot Marina Village welcomed children from the La Croix Maingot Combined School who sang Christmas carols to launch the holidays. There was local food for sale, a bouncy castle and a Christmas tree decorating competition for the children.  Marigot’s own Aagee Simpson rounded off the day’s festivities by officially turning on the lights of the Marina Village and entertaining the crowd with a carol.
Every Saturday through December, the village featured arts and craft displays, live music, pan bands, choirs, dancers and a St. Lucian Christmas Masquerade.

Interlux has introduced a new paint for light-colored aluminum outboards and outdrives. Trilux® Prop & Drive Clear with Biolux® Technology provides moderate antifouling protection in salt, brackish or fresh water while maintaining the original painted finish of light-colored lower units. The aerosol spray paint can be applied directly over previously painted surfaces—no primer is needed—and on any underwater surface where a moderate level of antifouling protection is needed but a pigmented paint is not desired.
For more information :  www.yachtpaint.com.

Dockwise Yacht Transport (DYT), the world’s only float-on/float-off yacht transport service, has announced several new routes to Dubai (UAE), Southampton (UK) and Aarhus (Denmark) which expand the Ft. Lauderdale-based shipping company’s list of destinations—currently including the Mediterranean, North West Europe, the Caribbean (St. Thomas, USVI), the Pacific West Coast of North America and Central America, and the South Pacific.  "With BBC’s ships added to the mix of DYT’s own fleet of four semi-submersibles, it is now possible for customers to choose from more ports of call in regions that before were either inaccessible or not serviced directly by DYT," said DYT President Clemens van der Werf.

"The difference in the transport procedure will be that BBC ships will utilize the more traditional lift-on/lift-off service, while DYT ships will continue with their float-on/float-off operations. In both cases, DYT service managers and loading masters oversee all details of a customer’s experience, from planning to implementation, insuring the safe delivery of yachts of all sizes, both power and sail." For a schedule, see www.yacht-transport.com.

In other yacht shipping news, Amsterdam-based Sevenstar has opened a new route between Savannah (Georgia, USA) and Zeebrugge (Belgium). “This was our direct response to a shortage of space that was prevailing on the transatlantic routes,” explains Sevenstar Managing Director Richard Klabbers. “It is ideal for smaller yachts of up to 40 ft, mainly of the powerboat variety.” The service started the first weekend of December 2007 whenMv Stadiongracht loaded over 60 boats at Savannah, GA in less than one day before heading off for Zeebrugge.

In addition to the ocean transportation, Sevenstar/Transport Partners also offers trucking services, transport cradles and shrink-wrap in the US and Europe, transport insurance and custom clearance. The new service will have monthly sailings and also accommodate cargo for final destinations in Spain, Finland and Russia.  For details visit www.sevenstar.nl.

Krause Manufacturing Inc, Bellingham WA, builders of KMI SEA-LIFT boat handling equipment, has appointed Tom Correll of Fort Lauderdale, Florida as company representative for the Southeastern United States, Bahamas and the Caribbean.  Correll brings nearly twenty years practical experience as general manager of a well-respected repair yard in South Florida and has been a marina and boatyard consultant for the past 8 years.