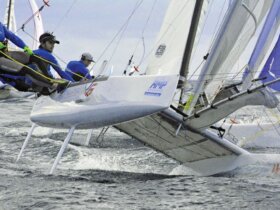 The Carl Gustaf Hotel, high on the hill overlooking the main port of Gustavia, provided a great vantage point to watch the Les Voiles de St. Barth fleet slowly filling up the anchorage and quays in the main harbor of this idyllic French island. Boats continued to arrive throughout the day, while others took advantage of the day’s fresh easterly breeze to go through some crew maneuvers and test sails.

The luxury hotel was host to a press briefing where Michel Magras, Senator of the St. Barth Collectivity and Francois Paul Tolede, general manager of Les Voiles de St Barth organizing committee, welcomed the media. Tolede said, “For the second edition of the event we are really happy to see such a healthy entry list. We must congratulate ourselves for having been able to position ourselves amongst the great sailing events in the Caribbean.”

While the Caribbean has seen a resurgence of new yachting events, Les Voiles de St. Barth seems to have struck a chord among sailors – the regatta has seen entries rise from 23 boats last year, to 53 for 2011. The island turns on its charm easily, what with Jimmy Buffet as the event’s Godfather, and festive dockside entertainment each day for the 500 or so sailors on hand.

As for the racing, tomorrow’s forecast calls for easterly trade winds of 22 knots, providing a great start to the week. The island and surrounding archipelago offer a variety of courses from 14 – 37 nautical miles, something for all classes.

Racing begins tomorrow and continues through Saturday, with a lay day on Thursday. The international fleet includes over 50 boats – from 17 countries – entered in five classes: Maxi, Racing, Racing/Cruising, Classic, Multihull.

In the Maxi class, Peter Harrison’s (UK) 115-foot Farr designed ketch,Â Sojana– a frequent competitor on the Caribbean circuit – will have a solid afterguard on board with Peter Holmberg at the helm, and French sailing legend Lionel Pean on tactics and navigation. Pean, who made his name in more solitary pursuits of singlehanded and around the world racing, has traded up to the comfort and camaraderie of a fully-fitted out boat such asÂ Sojana. As for his return to Les Voiles, Pean said, “St Barth’s is very singular, you don’t have to move a mark, there are natural marks everywhere. You can design a very nice race course along the shore. It’s very exciting for the crew, and exciting for the viewing, and makes this event unique.”

More than a few competitors have made the regatta into a vacation, Pean included, “Last year I brought my family, it’s great, we spend a perfect week. There are beaches everywhere.”

The Maxi Class also includesÂ Rambler 100Â (US), chartered by George David, with Ken Read as skipper; the Swan 112Â Highland BreezeÂ (NED) which has Volvo Ocean Race veteran Bouwe Bekking on board; the U.S. Merchant Marine Academy’s Dubois 97′;Â Genuine Riskwhich has a mix of US and Swedish crew headed by Hugo Stenbeck; and the 86-foot CNB sloop,Â Spiip.

The Racing class includes Jim Swartz’ (Park City, Utah)Â Vesper,returning for the 2ndÂ edition ofLes Voiles de St. Barth.Â  A frequent visitor to the island with his wife, he said, “I’ve always loved coming to St Barth’s – I think it’s the single best place in the Caribbean.Â  It’s a great island, great people, great food, great sailing and when I heard about a regatta here, I said count me in!” Swartz’s “new” boat this year is the TP 52Â Vesper, named – as all of his boats are – after James Bond movie characters. (Note to Trivial Pursuit players: Vesper Lynd was Bond’s one true love). Swartz has enlisted a formidable crew including Gavin Brady as tactician and Chris Larson on mainsheet.

Asked what draws him to Les Voiles, Swartz said, “It’s very much at the top of my list. It comes at a very good time, the transition from winter to summer, for those of us in the U.S.; it’s not overly crowded, the weather is spectacular, and it’s a great location.”

Nico Cortlever is the skipper ofÂ Nix(NED), a 60 footer from St Maarten, that is in the Racing Crusing class. Cortlever spends half the year racing in regattas throughout the Caribbean and spends his summers on the boat in the Mediterranean. The genial Dutchman has commandeered friends from his sailing club in Loosdrecht, a small lake south of Amsterdam, where they race Star boats and other small one-designs. He sailsÂ NixÂ with a crew of 12 friends, though he says,Â  “They’re not all experienced, so we have to train and sort out positions. We’ve always raced in the BVI (British Virgin Islands), but it’s a long way to sail from St. Maarten; this is closer by, it’s a nice island, and everyone likes to come here.”

Key information:
Les Voiles de St. Barth will be hosted from April 4 – 9 2011 by the St. Barth Yacht Club, which is affiliated with the French Sailing Federation and the Caribbean Sailing Association.

Les Voiles de St. Barth officially begins on Monday April 4, 2011 with the registration and the official opening of the Race Village on Quai du GÃ©nÃ©ral De Gaulle in Gustavia.

The Race Committee, led once again by principal race officer, Luc Poupon, will signal the start of the first race at 1300 (local time) on Tuesday, April 5. Racing for the rest of the week (Wednesday – Saturday) will begin at 1100. Thursday, April 7 will be a lay day, which will give the crews a chance to relax and enjoy themselves with a full and varied program of events planned at St Jean Beach. The closing ceremony and fireworks will follow the awards ceremony on Saturday, April 9.

More than 50 yachts have registered for the Les Voiles de St. Barth 2011 and they will be split into five classes:
SUPER / MAXI YACHT:Â a prototype or boat produced in limited numbers measuring at least 21 metres (69′) in length.
CLASSIC:Â referred to as classic or traditional yachts, these boats must be at least 35 years old.
RACING:Â racing monohulls, designed specifically for coastal or offshore racing.
RACING/CRUISING:Â mostly series boats, which are designed for cruising and for racing.
RACING-MULTIHULLS:Â Racing multihulls, including trimarans and catamarans, between 30 – 60 feet in length, which are very light and fast.