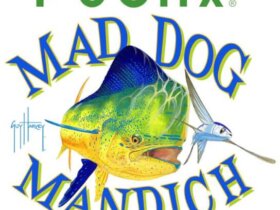 Antiguans are keen fishermen as was shown by the excellent local attendance at the 42nd Sport Fishing Tournament on 9-12 May 2008 out of the Catamaran Marina, Falmouth Harbour. Local participants also won most of the prizes, with only one going to a boat from St. Barth.

The terrific launch party in April attracted back many previous sponsors and also some new ones from as far afield as Dominica. The resulting entries to the competition included 21 boats from Antigua, three from St. Barth, four from Guadeloupe and one from St. Martin.

In the Marlin Division, John Fuller’s Blue Rapid was both the champion boat and won the most tag + releases. Champion female was Katlyn Hart, also on Blue Rapid, with Mick Liney on Rum N’ Coke winning the male champion award.

Although Brian Nunes’ Miss Ashley was champion boat overall in the Sporting Division, Blue Rapid distinguished itself yet again when Oliver Cobb broke the record with his highly impressive 62 lb. dolphin fish. Also aboard was Nick Fuller III, who won the Youngest Angler trophy.

Robert Hall landed a winning 39.5 lb. kingfish for Free Spool, which was also champion boat in the under 25 ft. section.

John Hall hooked the largest wahoo at 58.5 lb. and Christian Audebert on Wh’appen from St. Barth caught the largest tuna weighing in at 76.25 lb.

The Antigua and Barbuda Sport Fishing Association generally holds two competitions a year, the second one being in November – the Doc’s Tournament “Best in the West” held out of Jolly Harbour. This year, however, chairman Phillip Shoul announced a new event – the Francis Nunes Memorial Tournament – to take place on 28 September 2008. For further details, go to www.antiguabarbudasportfishing.com.

It just got a lot easier to purchase one of the premium saltwater sport fishing and high-performance boat brands in the Caribbean.