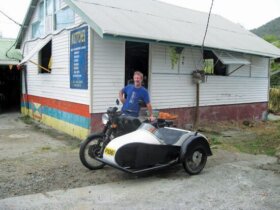 Saint Barth’s local windsurfing champion, Antoine Questel, has had a
busy year and recently sent an exhaustive (and exhausting!) recap of his
activities. He wrote in mid-Summer from the Hawaiian island of Maui where he
was training with a group of locals and pros for some pretty intensive,
high-speed slalom racing.

"Last weekend, we were on
the superb beach of Kahana which was the base for the organization of the Maui
Race Series," he wrote. "It was incredible to see 60 competitors race
at high speed from buoy to buoy the entire length of the lagoon, covered with
white foam whipped up by strong winds of 30 to 35 knots."

Not daunted by the sheer
physical demands of eight races in one day, Antoine finished in a very
respectable fifth place, coming in behind such windsurfing legends (as he calls
them!) as Alex Aguera and Anders Bringdal. The BBQ on the beach following the
race was well deserved.

The Maui races came hot on the
heels of the "Défi Wind" in Gruissan, France, on May 5-8, and the
European championships in Rhodes, Greece, on June 6-12. "The "Défi
Wind" is the biggest long distance competition of the year, open to
amateurs as well as pros, with a total of 450 competitors," says Questel.
"It was fabulous to see all the spectators along the beaches. They could
watch us fall head over heels at great speed, as there were winds up to 40 to
50 knots." Here, Questel also competed with the pros: Antoine Albeau, Bjorn
Dunkerberck and Gerald Pelleau. Out of the 450 racers, he came in 17th.

"The week after this
race, I completed my national sailing diploma, which made me very happy,"
he notes.

He then hopped a plane,
direction Greece for the championships. Here he was one of a field of 130
windsurfers, and once again the conditions were challenging with winds up to 30
knots.

"This was a very physical
event, and we had to stay out on the water most of the day, for a total of 15
races." This time, Antoine came in 35th place and admitted he
was none too happy with his results.

After the Hawaii race series
was completed, Antoine returned to France in mid-August where his plans were to
attend the national sailing school in Quiberon, and train with the fun-board
team, in preparations for the next round of European competitions. May the
winds be with him!