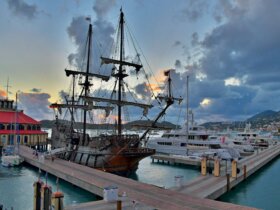 Sixteen boats cast off to the North Drop on Day 1. Angler James MacNeil, aboard the Mixed Bag, broke the ice at 10:05 a.m. when he reeled in the first marlin of the tournament. By the end of the day, a total of seven boats tied on the leader board with a marlin release apiece for 600 points each. One of these was Bobby Jacobsen’s 64-foot Viking, Marlin Darlin, however Abigail III was skunked.

Tim Aylward of New Port Ritchie, Florida, who with wife Kathleen angled aboard Abigail III and have every year since 1992, says, “We saw three and they played with the baits. That was it. You couldn’t have called any of them a hook-up.”

The Aylwards’ luck reversed Day 2 when they rocketed to the top of the leaderboard with the release of three blues. “We were excited when we thought about the possibility of winning, but we didn’t want to get too excited. After all, Gulf Rascal (with Capt. Billy Borer at the helm) released three for the day too, but we beat them on time,” says Kathleen, who earned Top Female Angler in the 1997 edition of this tournament.

Meanwhile, it was Marlin Darlin’s day to go fishless. Yet again, luck reversed on Day 3.

“Our captain, (Robert) Cujo (Brinkmeyer) decided we should go northeast, away from the fleet about five miles and it paid off,” says Jacobsen. “We released three fish all in the space of 45 minutes, between 10:30 a.m. and 11:15 a.m.”

Jacobsen adds, “One of them pulled the hook before we could tag it. It’s the only tag we lost.”

At 4 p.m., Marlin Darlin released their fourth blue marlin of the day, a feat that earned them a tournament total of 2900 points.

Meanwhile, it wasn’t until 3:34 p.m. when Tim Aylward released Abigail III’s first marlin of the day.

“We never catch fish late in the tournament, so we thought ‘that’s it’,” says Kathleen.

As luck would have it, Kathleen caught her first blue and Abigail III’s fifth blue of the tournament at 4:25 p.m., five minutes before lines out. Capt. Red Bailey, who served as mate while his son Kelvin, Jr, took the helm and regular mate, Ariel Donovan, made the tag as they had with all of Abigail III’s other releases, thus earning the boat 3000 points and the win.

Tim Aylward, with his release of four blue marlin, earned Top Angler and the prestigious Give ‘em Line Trophy.

“(Capt.) Red (Bailey) finally taught us how to fish,” joked Tim Aylward, “and we got lucky too.”

Past winners of the Give ‘em Line Trophy are a virtual who’s who of Marlin fishing. One of these was the late Elliott Fishman caught an all tackle world’s record blue marlin, a 845-pounder, while fishing the 1968 July Open Tournament.