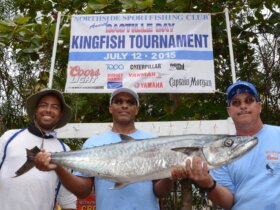 Everybody loves a winner. And, everybody wants to win a Rolex. But oh, there’s so much more to the International Rolex Regatta, hosted out of St. Thomas Yacht Club this year March 23 to 25. For when you get 87 boats together with crews from throughout the Caribbean and around the globe and give them challenging courses, hot competition, and plenty of sun, fun and rum, then you find out much more than who won, You discover why this event is a highlight for so many sailors each year.

Kai’s position on the boat? “I watched the time and I added weight to the rail,” said the some-60-pounder.  Kai’s sailing legacy is rich. His dad is a Prindle 19 national champ, his uncle is an America’s Cup skipper, his grandmother is a Sunfish World champ, and his grandfathers sailed Solings in the Olympics.

John’s wish for his son? “I just want him to have fun,” he said. “When we’re having a difficult time on the course, or the kids are bored, Kai sings goofy songs and we all laugh.”

Meanwhile, St. Thomas’ John Foster has raced in every single Rolex, that’s a total of 34 years. He has two Rolex Cups to his credit, scored in 1980 and 1981 aboard his J-24, Antidote. But, said Foster, “Winning is important, but its not everything. It’s not necessary in order to have a good time at the Rolex. The fun of Rolex over the years is seeing old friends and making new ones, the camaraderie.”

Yet, Foster’s claim to fame is not just his longevity, but also his continued competitiveness. His savvy sailing earned him, his son Johnny, and long-time crew aboard the Kirby 25, The Good, The Bad & The Ugly, a third place in the Spinnaker Racing 3 Class. Foster tied with the same number of points as second place Urayo, a J/24 skippered by Puerto Rico’s 2006 Rolex watch-winning, Gilberto Rivera.

Rolex Reunion. St. Thomas sailor, Wally Bostwick, sailed with a high school chum in last year’s Rolex and wanted to repeat the fun, as well as add two more classmates. He did just that. “We celebrated our 33 1/3-year reunion,” said Bostwick, who crewed the IC24, First Resort, along with Jack Keniley Jr., Rory Callaghan, and Alex Bursian.

These four guys met at the Robinson School, a private school in San Juan, Puerto Rico, graduated in 1974 and each went their separate ways. Water sports figured in each of their lives during the intervening years. Keniley sails 210s out of Cohasset Yacht Club in Massachusetts. Callaghan loves windsurfing and kite boarding so much he has a second home at Rehoboth Beach, Delaware. Bursian spent many years crewing aboard the Puerto Rican-based sailing yacht, Cachando, a past Rolex winner skippered alternately by brothers Jose and Tony Teixidor. And Bostwick has long lived in St. Thomas and has crewed on a variety of boats in some of the Caribbean’s biggest regattas.

Summing up the weekend, Keniley says, “Winning may be everything, and we didn’t, but so is staying connected to these guys. We’ve all agreed we’d like to make this an annual event, a way to re-live in a cool way our school days and enjoy each other’s company each year.”

When Losing Still Means Winning:  St. Croix’s Chris Schreiber and St. Thomas’ Terry Jackson knew they couldn’t out-run Puerto Rican Hobie 16 champ and multi-time Olympian, Enrique ‘Kike’ Figueroa, in the beach cat class. In fact, no other multihull in this 12-boat class could chip away at Figueroa’s flawless string of first place finishes. No wonder this crack cat sailor is primed to make his fifth Olympic bid in the Tornado class come Beijing for 2008.

Though posting a fifth place finish in class, Schreiber and Jackson did, though, post a win of their own, and one that will take them to Rio de Janeiro this summer. Jackson explained, “The Virgin Islands was granted a slot as a wildcard entry for the Hobie 16 class for the Pan American Games. The Virgin Islands Sailing Association set the Rolex as the qualifier.”

Schreiber and Jackson beat out the St. Thomas team of Tom Kozyn and Lisa Oseychik for the highly desirable slot. No stranger to international competition, Jackson has made two Olympic bids in the beach cat class and Schreiber competed in the last Pan Ams in the Laser Class. Good luck guys!