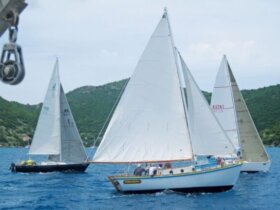 Curacao has famous Sunfish sailors and every year during the last two weekends of August they compete against each other.  This year, for the first time, the Curacao Sunfish Sailing Association rescheduled the races to avoid sailors missing the first weekend because of the summer holidays…this turned out very well, because that weekend there was almost no wind.

The next weekend, however, the Sunday races had to be canceled due to Hurricane Felix, while the same hurricane took the winds away on Saturday.
The second weekend, the weather was almost perfect on Saturday while "survival winds" on Sunday made the competition tense and spectacular.

For the first time, the short tracks were sailed on the so-called "storm pond" because there were too many sailing yachts "parked" along the usual course in Spanish Waters.  This turned out to be a very good pick, which will be continued in the following years.