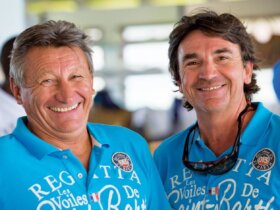 The Secret Behind the Success of Les Voiles de St. Barth

The evening rush hour traffic that crawled along Charlotte Amalie’s waterfront on Wednesday night, August 26, enjoyed a little entertainment. Three sleek sailboats raced windward and leeward just off the bulkhead vying to see who would be first around the buoys. This scene, reminiscent of the late 1980s, when Honeymoon Bay liveaboards and Gregorie East-docked racers would square off against each other in the same locale, is something sailor and restaurateur Rick Kingsland wanted to bring back.

“John Holmberg and I were having a conversation a few months ago,” says Kingsland, who manages Wikked at Yacht Haven Grande. “We were reminiscing about the Wednesday night racing out of Barnacle Bills. John said, ‘I’ve got the boats,’ and I answered, ‘I’ve got a big mouth.’”
Thus was born the OnDeck-Wikked Wednesday Night Sailboat Racing.

The idea kicked off with a nine-week race series held in July and August.

Sailors who want to race sign up a week in advance and about 45 to 50 people come out each week. Racing starts at 5:30 pm and lasts until sunset. This gives enough time for two or three races.

“The first two weeks, we calculated finishes on a PHRF handicap,” says Kingsland. “It showed we could be serious if we needed. The third week, we held the results upside down and read off the winners.”

The sailors, whether they be aboard OnDeck’s Farr 40s or aboard a handful of private boats – everything from J-boats to cutters – are motivated to race by the sheer enjoyment.

“There’s not really any opportunities to race in the harbor. It’s incredible,” says Sandy Symkens, who handled one of the Farr 40’s mainsheet. Still, prizes are a part of sailing and Kingsland secured prize sponsorship for the series from a local beverage distributor.

There’s always a post race party ashore. An OnDeck employee films the races and Kingsland plays them back on the video screen at Wikked.
In the future, he says, “We’re going to set up other series, change it up a bit. Maybe bar wars with teams from different bars competing or maybe the Police versus the Fire Department. We want to get the community out and have fun.”